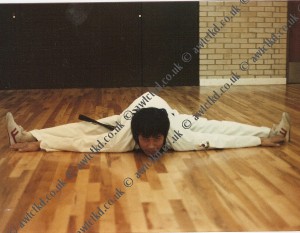 Master Yoon began training in Taekwondo in 1960. He competed in his first competition at the age of 15, subsequently becoming the Korean National Champion, holding the title for 6 years. He served as an officer in the Korean Marine Corps where he spent 3 years an an instructor. On leaving the military in 1974 he became a Master Instructor for the HQ of Chungdokwan in Chunbok province, the leading club in Korea. He went on to train 5 World Champions for his country and club. On moving to the UK, Master Yoon became the Grading and Technical commitee Chairman for the British Taekwondo Federation, for 5 years before forming his own organisation. He is a WTF Master Instructor, WTF International Referee and a member of the Kukkiwon Overseas Advisory Committee. He currently spends his time alternating between his homes in Korea and the UK, running organisations in both countries.

Has trained and taught taekwondo for over 25 years. Fought nationally and internationally winning 3 national titles.

Master Worsfold started in Taekwondo in 1985 under Master Yoon. He had previously trained in Kyokushinkai Karate, under Pete Kisby, Judo, Aikido, Jujutsu and Lau-gar Kungfu. He also began Tai Chi Chuan and Qi Quong as the same time under the late Akira Lim. He spent several years in the military where he learnt to box, become competent in self-defence and worked in close-protection for high profile personnel. Spending some time training with the Combat Training Team he became a member of the International Military Advisors Group before moving into Film,Television & Theatre. In the latter guise he has worked with and provided stunt performers and fight directors. Master Worsfold is a trained Weapons/Firearms Coach & Instructor, a Ski, Canoe & Mountain Expedition Leader and a qualified medic.

Sarah had trained under Master Hibbs for over 24 years and coached for the past 8. She is passionate about grass roots training for primary age children. She is a former British feather-weight champion and has competed at national and international level for over 16 years. Sarah has represented Great Britain at Open Internationals, World Cup and European Championships and the World Championships in Korea in 2001.

Master Rowley began training under Master Yoon in 1992. In a previous life he served several years in the military.